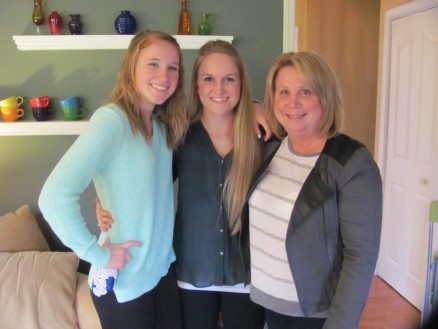 Karen graduated from Ivy Tech in 2006 and now works at Community East Hospital in the Labor and Delivery Unit.

Several years ago, Karen made the decision to come to Ivy Tech when she found out her job as an account manager was being eliminated. She had always been interested in labor and delivery nursing and found that at Ivy Tech she was able to study nursing while staying at home with her children part-time. Karen was very happy with the class size, convenience, and affordability of Ivy Tech.

“It was quick and very affordable (with four children at home) and I was told by many of the clinical units that they preferred Ivy Tech graduates over other schools because we always worked really hard. My Director at Community East Hospital was also an Ivy Tech graduate,” Karen said.

When it came time for Madison to pick a college during her junior year of high school, Karen had some wise advice for her.

Thanks to her mother, Madison knew Ivy Tech would offer her one-on-one instruction that she would not get at a larger university. She also noted Ivy Tech is the most cost efficient route that will put her in her desired field in the least amount of time. Madison is currently enrolled at the Ivy Tech Hamilton County Campus.

“Ivy Tech will help me achieve my goals by giving me an excellent education with many opportunities for growth by allowing me to take my learning and advancement in my own hands.”

Along with Ivy Tech’s affordable tuition, Madison received a scholarship through the Rotary Club in Noblesville and won a drawing for a free class at the opening of the Hamilton County Campus. Similar to her mother, Madison’s favorite thing about Ivy Tech is its flexibility. She has the ability to create her class schedule around her work schedule, while continuing to advance.

Madison plans to graduate with her degree in nursing, just as her mother did. Upon graduation, her goal is to work in an emergency department of a hospital.

She said of her mother, “She was definitely a good example of the fact that Ivy Tech degrees stand out in the working field. Her success with the school made it apparent to me that it was an excellent place to obtain my education.”