According to Lore’al Avery, “Impossible is nothing.” 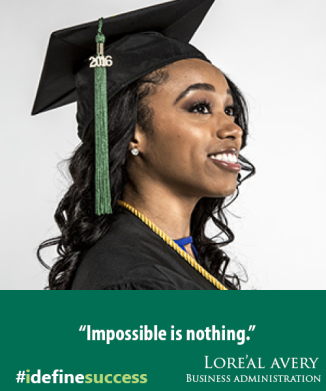 Growing up in Gary, Indiana, being the daughter of a single mother, and the first in her family to graduate college, Lore’al has proven that no matter your background, “Impossible is nothing.” Lore’al began her college career with three goals in mind: to finish college, to do so debt-free, and to do so with a 3.5 GPA or higher. This year she accomplished all three of her goals, graduating Cum Laude from Ivy Tech. She took advantage of most, if not all, of the opportunities provided to her during her collegiate career. Lore’al is a former volunteer for Girls Inc., and a Bowen Scholar, which she credits as one of the biggest reasons that she was able to accomplish her goals during her time at Ivy Tech. 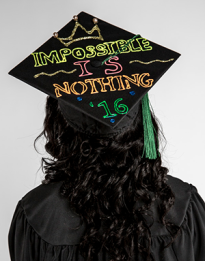 In November 2015, Lore’al competed for the crown and title of Miss Indiana USA 2016. Along with this, Lore’al was provided with several opportunities to network with some of Indianapolis’s most elite individuals. She attended an event put on by the Indianapolis Urban League at the Lucas Estate and went to see Judy Smith, Star Jones, and Steve Harvey during their visits to Indianapolis. She also accepted two invitations to speak on behalf of the Bowen Scholarship Program; at Ivy Tech’s Circle of Ivy Women in Philanthropy Initiative and in Naples, Florida at the Bowen’s Estate.

Lore’al is transferring to IUPUI in fall 2016 to study business and finance, with a minor in communications. She will be competing Miss Indiana USA 2017.